By Jack MontgomeryAugust 19, 2021No Comments

It’s our own fault, I hold my hands up, we’ve succumbed to the disease. Not only succumbed, we’ve embraced it enthusiastically, like it was a long lost friend.

Since returning to Britain, we’ve opened our front door wide and welcomed materialism and all its mates into our house.

In our defence, we didn’t have any choice. We arrived from Portugal with a couple of suitcases; the rest of our belongings still in a warehouse somewhere on the Iberian Peninsula. Not that there was a great amount of belongings – a wine island, full length mirror, a couple of chests, TV, and 40 small boxes filled with work documents (useful and useless info from all across Europe, and an atlas of maps) and the rest of our clothes, plus a few other bits ‘n’ bobs. Renting an unfurnished house meant we rapidly had to turn it into a furnished one – hello materialism. 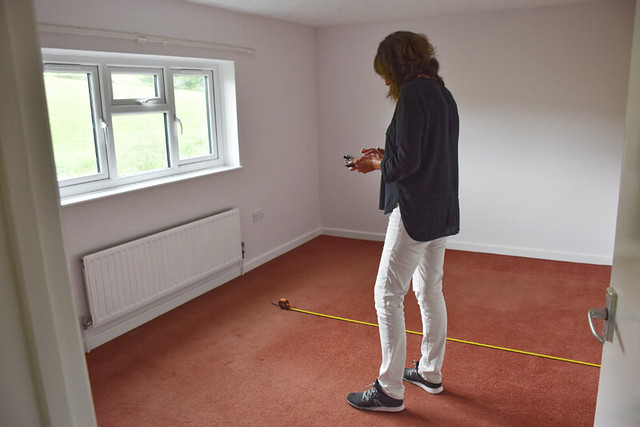 In four years of not having a single delivery to the house in Portugal, we’ve spent much of the last two months as prisoners in our own home, passing hours watching down the drive, hoping for a delivery van to appear. It has been an educational and illuminating experience as we’ve been able to conduct our own little survey, comparing and contrasting the efficiency of various companies and couriers.

Coming in clear winners is the much maligned Amazon, whose products have consistently turned up when promised. Amazon haven’t been guilty of confining us to our home with ambiguous delivery times, or having delivery windows that were ridiculously wide: twelve hours in one competitor’s case. I was most impressed at being able to track one driver’s progress along Devon lanes as his little circle moved ever closer to us on the map, leaving us free to go about our business until he drew close. 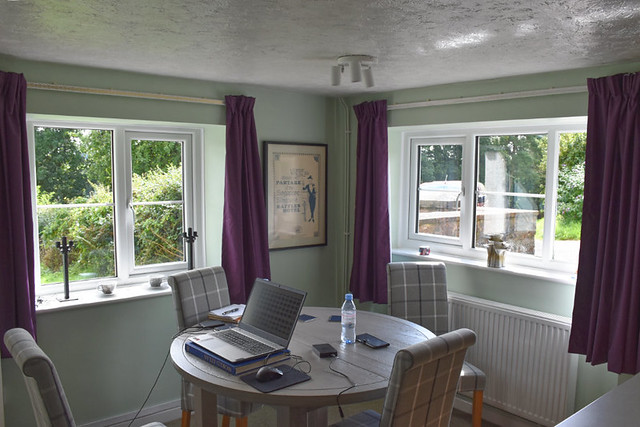 The lookout aka the dining room aka the office.

Sharing second place is DFS and Oak Furnitureland, who both turned up promptly on the day we moved into our house, meaning we had somewhere to sit, somewhere to eat, and somewhere to sleep. For that we shall be eternally grateful.

In third place is Dunelm, whose products have generally arrived up on the day promised, but not always on time. This seems to be partly down to whatever courier they use – we’ve had both DHL and Yodel. In one example, an estimated lunchtime delivery arrived early evening, the driver delayed due to having a ridiculous amount of products to deliver – still twelve to go after us. “Wow, poor you. You must be shattered,” I remarked to him when he finally turned up on the doorstep.
“Nope, it’s fine,” after a full day of delivering he was still perky. “I don’t mind. I get paid for each delivery.”
An offshoot of our unofficial survey is I’ve discovered delivery drivers aren’t as badly paid as some newspaper articles led me to believe. But they work long, long hours.

In fourth place is Currys, who started strongly – a fridge, washing machine, and tumble driver arriving exactly as promised shortly after we moved in. Since then it’s been a downward slide. First, a Yodel delivery driver recorded ‘unable to access the property’ when he simply hadn’t turned up. The follow-up driver arrived outside the house, then took off again before I could get out the door, actually driving across a lawn in his bid to get away. However, I managed to cut him off at the pass before he escaped.
Currently we’re waiting for another Currys delivery. It was supposed to arrive on Friday, but an email popped into the inbox yesterday (Tuesday) without warning to inform us DHL would turn up between 13:20 and 14:20, an impressively precise time frame. Except they didn’t, and there was no other communication until a tracking update at 22:00 informed us the ‘parcel’ had been returned to the depot at 20:00 as the driver hadn’t managed to fulfil all their deliveries. We rearranged plans in order to wait for it, so were not happy bunnies. It’s now due between 18:03 and 19:03 today. I no longer have any confidence in that precise little delivery window. 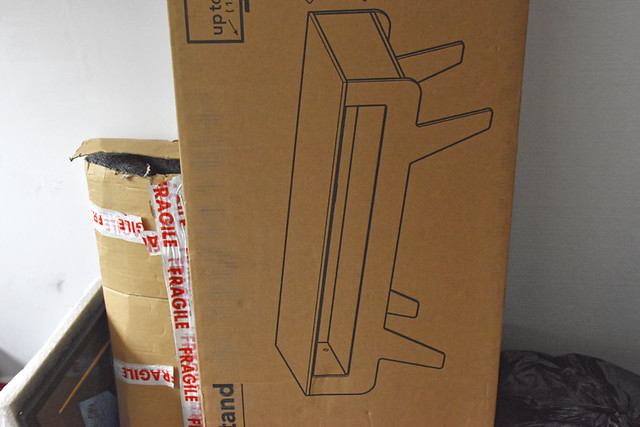 It finally turned up, just not at the estimated time.

Bottom is BM. We’ve only had one experience with BM, and it will be the last due to a complete lack of communication regarding delivery times, and three days wasted as a result.

The mixed results seem to be down to firms using a variety of courier services, some of which are more efficient than others. Most drivers have been professional and friendly; some have simply done their job … eventually … without any niceties attached. And there were a couple I wouldn’t employ to do the most menial of tasks. A surly BM driver who dumped our delivery on the ground without a word, rounding off what was a completely unsatisfactory experience, was one. Sometimes you just get bad employees. I know this only too well from a pre-writing career in the DWP.

Having now experienced a wide range of different delivery practices, I can see what are good practices and what aren’t, and who is customer focused and who isn’t. As a result, something seems blindingly obvious. Deliver a friendly, efficient service and you’ll get return customers. Don’t and you won’t; you’ll lose your custom to those who can. If one company can tell me, within a reasonable time slot, when they’ll deliver, why does another need a 12-hour window?

It’s not rocket science to see why the likes of Amazon are, well, rocketing. Personally, I won’t shed any tears for companies who lose business because they’re not delivering the goods; literally in this particular case. Stripped of My Title