By Jack MontgomeryFebruary 10, 2021No Comments

It’s a dreich old morning; the wind’s howling and the rain’s lashing against the living room window. It’s blowing in from the south west which means the flood barriers are in place; two red RIU Hotels & Resorts beach towels stretched out the length of the window.

Before I continue, I have to point something out about these RIU towels. Despite how it seems, they were not pilfered from a hotel, they were presents given to us during a press trip to the RIU Palace in Costa Adeje, Tenerife, along with a flamenco CD. They’re quality towels as well; big and fluffy. I feel sorry for them, they thought they’d be spending their lives spread out on some sun-kissed beach. Instead they’ve ended up as flood barriers in a converted wine press somewhere in Portugal. 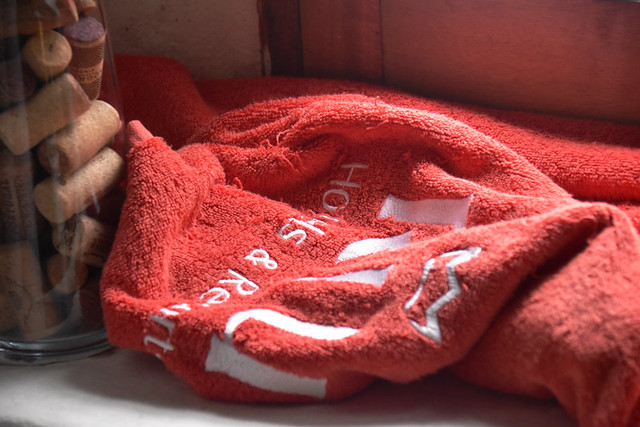 RIU beach towels – a gift, not pilfered from a hotel.

No doubt Dona Catarina (DC) will have had a sleepless night. She didn’t sleep well the other night either thanks to worrying whether we’d be drowned in our beds as we slept. She’s been fretting ever since she found out about our little mishap a couple of weeks ago. As soon as the rain let up she was knocking on our back door to check if all was “tudo bem?”

At this time of year that’s the second thing she says to us when we see her (the first being “bom dia”). It speaks volumes about these houses that, when skies are anything but clear, DC feels compelled to ask if everything is okay each morning … and is surprised when the answer is “yes, everything is fine.”

The rain had been persistent but not heavy, so everything had indeed been fine. She gave us an update on the planned window shutters that would prevent rain from seeping into the living room in future. Two weeks have passed and there have been a number of consultations outside the window, but no shutters have appeared yet. The problem is that if two equal-sized shutters were fitted, one would partially block the back door when it was in the open position. The solution was to make shutters of uneven sizes – a third to two thirds – and this complication has delayed things. We wanted to suggest making shutters that folded over, but we didn’t know how to say it in Portuguese, so we’re going to get uneven shutters. They’ve been ready since Friday apparently, but the bad weather has prevented the window man from being able to fix them. There’s irony for you. 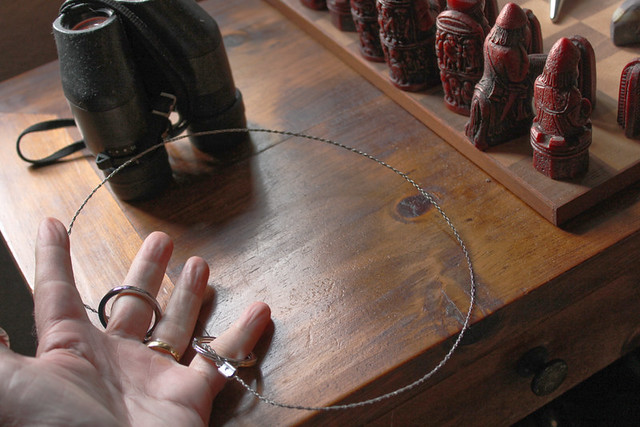 The packaging said it was a camping/hiking saw. It looked like a garotte to me.

The gap under the back door has proven more of a head-scratcher. The issue is the door is at a lower level than the terrace. This has created a small pit which becomes a pool when there’s heavy rainfall. At some point in the past, someone built a run-off. The flaw is this ‘run-off’ consists of a pipe which leads from the tiles directly outside the back door to garden level, about a foot and a half higher. I wasn’t the best at physics at school, but even I know water travels down not up. The pipe might double as a nice little escape route for stag beetles which do lemming impersonations by running off the terrace into the pit, but it doesn’t take a mathematical genius to work out what’s going to happen when it rains.

DC told us how fishermen in Setúbal protected their houses against the Sado intruding when water levels are high. They have tracks outside their front doors which they slot panels into when there’s a danger of flooding. However, building a sluice gate on the back door seemed a disproportionate response. In three years, water has breached the back door a grand total of once. 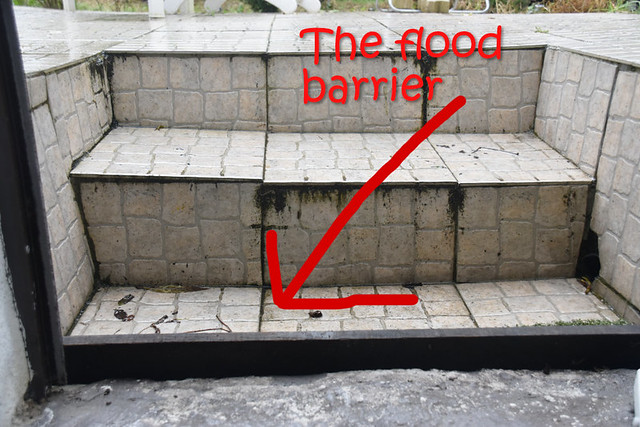 These look a lot better when it’s dry and sunny. But after a couple of weeks of wind and rain …

Instead I decided to build my own version. It was Andy’s idea. Find a plank, and cut it to the right size so that it slotted across the pit directly outside the door, creating a temporary sluice gate affair. Rather than borrow a saw from DC, it provided the ideal opportunity to try out a nifty little Christmas present – a camping/hiking saw that looks more like a garotte. It would be a lot more effective on flesh than it is on wood because, after a few sweaty minutes of rhythmic pulling one way, then the other, I barely managed to create a nick in the plank; and it was a soft, soggy piece of wood as well. In the end I had to finish the job off with a hacksaw. Still, it slotted quite nicely into place, and we have a dry floor this morning.

DC hasn’t seen my handiwork yet, but as soon as the rain lets up I’m sure she’ll be along to ask “tudo bem?” with a concerned expression on her face.