The Fundamentals of Life in Rural Portugal

By Jack MontgomeryFebruary 1, 2021No Comments

A week ago it was 5C in our kitchen first thing in the morning, rising to a balmy 7/8C by midday. The kitchen wasn’t the coldest room in the house, that accolade goes to the ‘office’ which was declared a no-go zone until the weather sorted itself out.

Most of our time indoors has been spent in the living room/dining room/office/changing room with the fire being lit as soon as breakfast is over. A heavy curtain covers doors that blow open every time there’s a strong breeze – an uninvited wind comes straight through gaps in the roof tiles and wooden slats in the kitchen and hall. It used to also come into the living room via gaps between the roof panels and the walls, but a sponge cut into strips sorted that little problem out. Having the fire lit all day, every day, means having to chop wood every couple of days just to keep it stoked.
It’s been an unusually long cold spell. Dona Catarina (DC) keeps on telling us “isso não é normal”, her eyes searching the skies as she does so, as though looking for whatever celestial being is responsible for looking after nature’s temperature control. 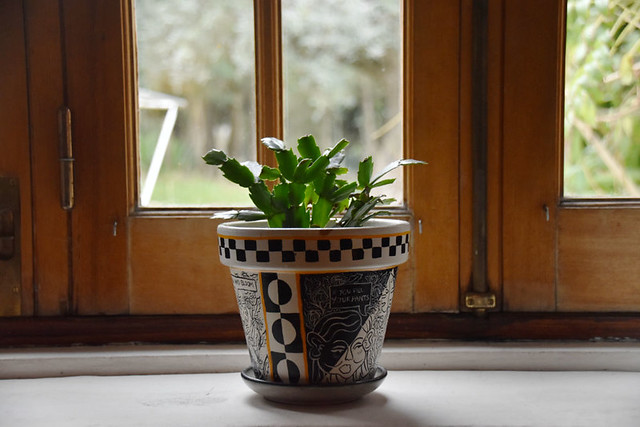 The old wooden windows are a nice feature, but not great for keeping out heavy rain.

The cold snap came to an end when rain muscled in on the scene on Tuesday night. In the wee small hours it hammered it down, the deluge prompting Andy’s bladder to want to join in. As she made her way to the bathroom, she found herself paddling the last few feet; the bathroom, hall, kitchen and part of the living room was flooded. After checking the living room roof hadn’t collapsed, destroying our laptops etc. we decided to leave our new indoor swimming pool till morning. One of the benefits of having a house whose floors are all tiled is it’s easy to mop up after little mishaps like this. A morning inspection revealed some rain had come through the living room window (always a problem when it hammers it down from the west) where a towel we’d put in place at least prevented the worst. But most of the water had flowed under the back door.

DC was on the case immediately. First up was a man we haven’t seen before who took measurements of the living room window in order to install shutters. There are already fixtures in place for shutters. However, the previous ones were wood and only lasted two years before they disintegrated due to weather damage (mostly thanks to an unrelenting battering by the sun). Then Senhor Zé and wife appeared to survey the back door. Senhor Zé is deaf, so shouts everything. Senhor Zé’s wife also shouts (because Senhor Zé can’t hear her otherwise). Dona Catarina also shouts for the same reason. As they rummaged around in the soil at the side of the back door, bellowing potential solutions to each other, it sounded like a Glesca pub at closing time – the conversation equally unintelligible (I’m from the West of Scotland, so I can say things like that).

The rummaging must have upset nature’s balance, next morning we woke to find a line of ants stretching from underneath the back door to the frivolous fridge (the one with choccie, dips, beer, etc.). Some had even managed to get through its seal and were congregating at the crisper, trying to work out a way to get to the goodies.

Then, on Sunday, the kitchen sink tap completely snapped off in Andy’s hand whilst she was cleaning it. DC asked if I could repair it, using a tap from another house. In a conventional world I would give it a go, but not in B-I-Y land (anyone who’s read Camel Spit & Cork Trees will know all about botch-it-yourself) where nothing is standard and has probably already been patched up at some point anyway. Trying to fix things here is to make a sentence with ‘worms’, ‘a can of’, and ‘opening’.
As Marcel, the closest thing to a professional workman in these parts as he has ‘heating engineer’ on the side of his van, was unavailable for a few days, DC said she would draft in Senhor Zé. For the next 48 hours or so we had to fill a basin using water from the shower whenever we needed to wash the dishes. 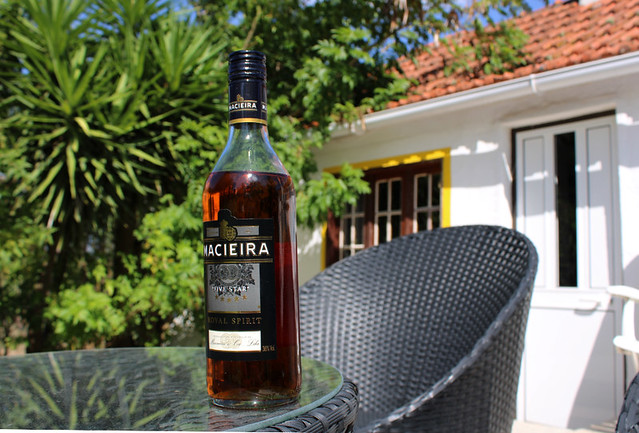 Senhor Zé had done a good job of replacing the back door – to the right of this rather fine Portuguese brandy.

As usual Senhor Zé turned up with his wee wife in tow, and “os tres velhos” (the three oldies, as DC called them) set about trying to fix a new tap.
Within five minutes I bitterly regretted not trying to fix it myself. As Senhor Zé had replaced our back door, installed a new wood-burning stove, and built a replacement sewage system, I though installing a tap would be a breeze for him. Not so. After 40 minutes he still hadn’t attached new tubes to the new tap (a simple matter of screwing them in place) – the instructions remained, ignored, in the tap’s box. It was clear he was as clueless as me. More so as, by this time, I had figured out how to replace the tap. But it was too late to muscle in and take over. Instead I watched and winced as Senhor Zé creaked to the ground, groaned as he squeezed himself into the cupboard below the sink, and then wallowed on his back like an old turtle, requiring DC and his wife to drag him back to his feet (COVID etiquette meant I couldn’t help him). The whole thing was painful to watch. In the end I couldn’t, so I retired to the living room to join Andy where, for the next hour, we listened to groans, heated debates, and lots of giggling as the three ‘velhos’ tried their best to replace the tap. 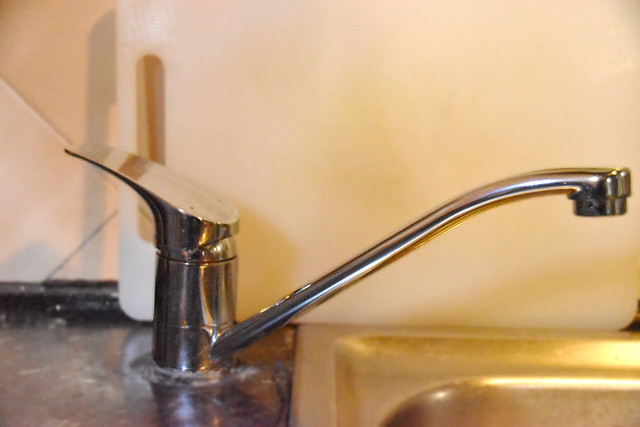 At least it works.

Now we have to hold the spout when we turn the handle from hot to cold, or vice versa, as the fixture is a bit wobbly; and the handle itself is on back to front (who knows how that happened as it was on the right way when the packet was opened), looking a bit like a metallic Woody Woodpecker. But at least we do have hot and cold running water in the kitchen again.