The leaves outside the window have teardrops on their tips. It’s a drizzly, grey day and it’s cold – around 7C. That might not seem cold to some folks, but when you live in a house which doesn’t have central heating, believe me, it’s toe-nipping chilly.

Whether our neighbours light their fire or not today could provide evidence which might finally solve the great woodshed mystery. You see, in theory there is no wood for the fire. 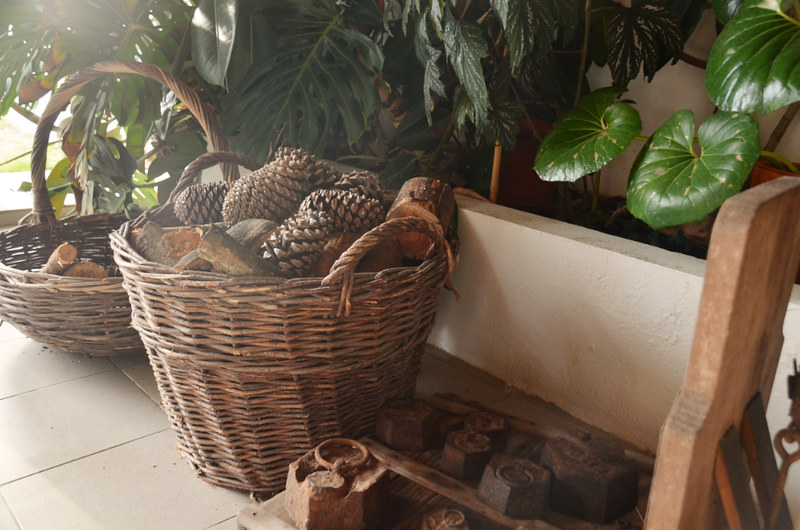 … last February when Senhor Fernando found a job and, for a change, stuck to it. He still turned up at the farm on odd days, and kept the woodpile stocked as best he could. But then COVID kicked in and Dona Catarina turned the quinta into a fortress. Nobody was allowed in, especially not Fernando who was mixing with any number of potentially infected people at his job on the docks. With the nights still being chilly, and nobody to manage the woodshed, supplies started to dwindle.

I thought Fernando had left plenty to get us through the last few weeks until the warmer nights returned, but every so often the pile of logs looked as though a plague of locusts had descended. One day there were rows of logs stacked high and deep, the next a wood-eating giant had taken a greedy mouthful. The healthy pile of logs quickly became anorexic, to the point we had to do a bit of wood management ourselves to see us through. This wasn’t a problem. I’d managed my own wood on Tenerife and had my own chainsaw. Neighbour A hadn’t, but I offered to give him a lesson. However, he declined my offer … a couple of times. But we managed to chop enough wood to keep us all cosy till spring.

… Dona Catarina’s fear of the ‘virus’ took a summer vacation at the same time the Portuguese summer holidays started, and the other two casitas on the farm were regularly populated by Portuguese holidaymakers from other parts of the country. Various farm workers came and went, maintaining the quinta by chopping down trees (the irony is there are trunks galore piled about the place, ready for chain-sawing into smaller pieces), fixing electrics that had gone wonky, keeping the gardens tidy etc. But as summer sashayed into autumn, and the nocturnal ambience indoors moved from ‘too hot to wear much at all’ to ‘Mmm, perfect’ to ‘long sleeves and socks required’ it became apparent that the problem of lack of wood in the woodshed wasn’t being addressed. Without Fernando, nobody was planning for the coming winter.

… we pointed out the shortage of firewood to Dona Catarina. She was shocked to learn the woodshed had an empty belly. Apparently she rarely lights a fire. If it gets too cold, she simply goes to bed. This seems crazy to us. On a farm where wood is really not a problem, why spend nights shivering in a cold house? Neighbour A says DC told him she was afraid of lighting fires.
To her credit, she immediately said she’d ask Sergio, a neighbour’s son, to stock the woodshed with logs. Unfortunately, the day before he was due to get chopping, he sliced his leg open with a chainsaw. We’d watched Sergio chop down trees on the farm during summer. He carried the chainsaw like a flamboyant gunslinger, swinging it beside his leg even as he started it up, so hearing he had an accident didn’t come as much of a surprise. He was okay, but had to hang up his saw until his leg healed.

DC isn’t keen on us operating the machine – Sergio’s little accident didn’t help allay fears about the potential dangers of using chainsaws. But with nobody else able to tackle the job for a couple of weeks, there was no other option. Anyway, Andy and I like being in control of things which affect us, so it suited us to be able to manage our own ‘heating’ arrangements.

We chopped enough to last a few days and …

… to make sure our neighbours didn’t think we’d cut the wood just for our own use, when I next saw L I told her we’d left sawn logs for all of us to burn.
“Oh, we don’t really use the wood from there,” L replied, which came as a surprise as you can’t really miss when anyone on the farm lights a fire – smoke drifts past the windows – and there had been smoke billowing from L and A’s chimney from early morning onward for the previous few days.

We sawed wood one more time before Marcelo, the other some-time handyman, and his friend turned up one weekend to restock half the woodshed with logs. They cut enough to last a couple of months … or so we thought.
Filling our wicker basket gave us a sufficient amount of firewood for four days even though it’s not a big basket. DC installed a new stove in our living room at the end of last winter and it’s wonderfully economic. The previous one had an insatiable appetite for wood and was mean with its heat. The new one likes to savour its food, and radiates warm satisfaction quickly and generously.
Four days later we toddled back to the woodshed to fill up again … to find half the supply had vanished. It was a shock … to such an extent we went easy on how much wood we took, basically resorting to self-rationing so the remaining logs would last us and our neighbours longer.

… a period of time which baffled us. We knew how little we were getting through – without scrimping too much – so it made no sense that so much wood could have been consumed in such a short time. DC doesn’t use it, we know exactly how much we use and, according to L, our neighbours ‘don’t really use the wood from there’ either. So how in hell had it disappeared so quickly?

This is The Great Woodshed Mystery.

… I’m reading the Complete Volumes of Sherlock Homes at the moment. What would the great detective deduce from the evidence in front of him?

There are three households and one woodshed. DC is definitely not burning wood, leaving two households which we know, from smoke billowing from chimneys, definitely are. One household lights the fire in the evening (us), one from morning onward (our neighbours). Whilst one household is able to source their own supply of wood (us), the other isn’t (i.e. hasn’t learnt how to use the chainsaw). Where one household visits the woodshed regularly, the other ‘doesn’t really’. And yet, when Marcelo does fill the shed, every so often a substantial amount of cut logs can suddenly disappear. Whichever way I look at it, all of these facts don’t add up.

… I can see the logic and convenience in managing wood this way, except for one thing. When you’re sharing with others it’s not a particularly fair way of doing things, especially if you don’t tell anyone else you’re doing it. Every time we fill our basket, we make sure we leave enough for A and L. Over the course of the fire-lighting season, we basically try to use only half the wood supply. However, if someone has already ‘removed’ half of the original wood supply, we’re then only using half of half. Which means we end up with a quarter of the supply whereas our neighbours could be using up to three quarters of it. That’s quite an unfair imbalance, especially as we’re also the ones investing time and energy cutting more wood when the woodshed is bare.

Of course, this is all supposition. I don’t really want to ask A and L if they have a secret wood stash, that would make me come across as the crazy neighbour poking his nose into their business. But I can’t think of any other solution which fits the evidence.
If I am right, I don’t think it’s done surreptitiously or knowingly selfishly. Other incidents would suggest it’s more likely to be naivety than anything else; not thinking through how actions impact on others; something which is vitally important when sharing amenities.

Now the woodshed is empty …

… it has been for a couple of days. In theory our neighbours shouldn’t have any wood to burn, so if any smoke drifts past the window this morning it would suggest they do indeed have a hidden stash.

And there she blows.

More tales of life in off-the-beaten-track Portugal can be read in Camel Spit & Cork Trees: A Year of Slow Travel Through Portugal.